Wherever you are in your journey of faith, there’s a way for you to connect with the Cathedral.

We’re glad you’re here. We’d love to hear from you. Please introduce yourself by filling out this form. 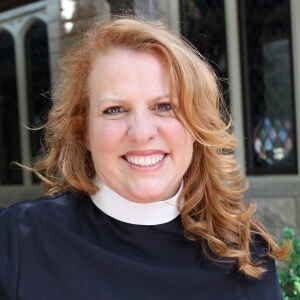 Kathy Pfister was called to serve as the Canon Vicar in June of 2020. Prior to her ministry at Christ Church Cathedral, Kathy served The Episcopal Church of the Good Shepherd in Austin, Texas, for ten years; first as an associate on the Windsor Campus, and subsequently as the founding Vicar of The Hill, Good Shepherd’s second campus. Before serving the Episcopal church as a priest, Kathy worked as lay youth minister at Trinity Church in New Orleans, and as the Missioner for Youth and Young Adult Ministry in the Episcopal Diocese of North Carolina.

Kathy was raised in New Orleans, Louisiana, earned her BS in Psychology from The American University in Washington DC, and ultimately landed in Texas to attend Seminary of the Southwest where she received her Masters of Divinity. She recently completed The Deep Calls to Deep fellowship in preaching at Virginia Theological Seminary. Kathy and her husband, Phil, have two nearly grown children, Charles and Camille. In her free time, she enjoys cooking, creating, laughing, and listening to music.